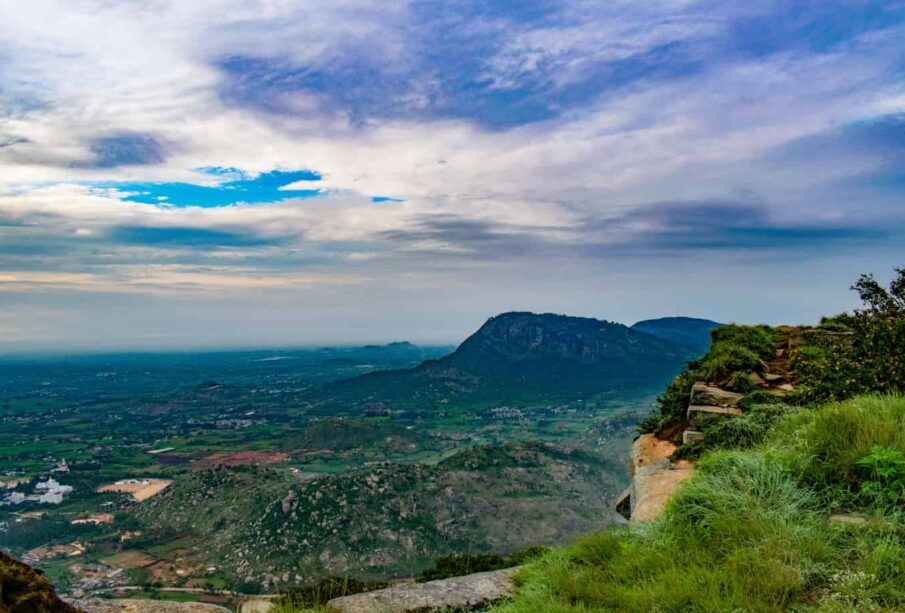 A small getaway from the mundane and stressful lives is all one seeks on a weekend. The city life has worn off a majority of us and with every nearing weekend, we look forward to a calming and rejuvenating weekend away from this stress.

A very nice way to experience such a calming and healing weekend couldn’t be found better than in a beautiful hill trek’s green and serene lap. Nevertheless, there are a lot of such sites in and around Bengaluru and one such beautiful and historic hill range is the Skandagiri, which is growing in popularity day by day as a popular and fun weekend trek near Bangalore.

Starting point of the trek

The trek for Skandagiri starts its trail from the Papagni Mutt (Mutt is like a monastery in Hinduism) which is also one of the most ancient mutts of Karnataka and further goes on to the ruins of ancient forts of the 18th century at the top of the hill.

The Skandagiri has a breathtaking view from the top and one can even see the beautiful neighboring hills from the top.

Why it is so famous

The Skandagiri is also famous and favored by a lot of trekkers and tourists for its short duration trek. The trek at Skandagiri is about a total of 4-5 hours including both the time taken for ascending and descending the hill. There are many paid trek guides who guide people through the trek and show them the beautiful sites on and from the hill and also explain the intrigued questions of trekkers and tourists regarding the historical and cultural importance of Skandagiri and also take them through the historical memory lane with the help of the fort ruins on the hilltop.

There are a lot of things to experience on the Skandagiri trek. The Skandagiri trek is composed of beautiful rock formations and structures which are also visible from the Nandi giri. The beautiful rocky structures of Skandagiri have also been praised by many famous people since time immemorial. The trail of the Skandagiri trek comprises mainly rocks, mud, and boulders. The thick plant cover is mostly shrubs, bushes, and small trees, and even some big and medium-sized trees make the trek filled with nature and make it even more enthralling and exciting.

Another very interesting and enthralling sight is the Shiva Temple situated on the top of the hill. This Shiva temple is very famous for it dates back to the 18th century while its surrounding is in ruins. Many devotees regularly climb the hill to pay a visit and worship in this auspicious temple. Apart from that, the view from the top of Skandagiri hill is breathtaking. The beautiful sky, the nearby foliage and greeneries, and the beautiful town of Chikballapur are eye candies for people from the cities where these are rare sights to behold.

Skandagiri is also famous for its night treks. The night treks mostly take place at around midnight and post-midnight and the top is reached at around 6 AM in the morning. This also enables the trekkers to enjoy the night adventures on the Skandagiri hill and experience the taste of camping on the rocks and boulders and also enjoy the beautiful and magnificent sunrise from the top of the Skandagiri hillock and behold the sight of the yellow-orange sun lighting the entire sky of Karnataka in its hues.

Skandagiri is a beautiful and enthralling trek for people looking for a quick subtle and intimate interaction with nature a bit away from the city and to dwell in rich history, culture and tranquility and to view the beauty of Karnataka. These are some of the things that make Skandagiri a famous and popular weekend trek near Bangalore.

5 REASON TO DO THE KALSUBAI TREK

What distinguishes Airport Management programmes from others?